SHOOT YOUR SHOTT is a modern day dating game. Created during the 2020 pandemic, SYS is the first & only interactive, quaranteen dating game show!

SHOOT YOUR SHOTT is different from any other dating game show because it's 1) live, 2) virtual 3) interactive, & 4) features a gorgeous guest with TV, film, or internet notoriety.


​This hilarious show is broadcast on Facebook, YouTube, Twitter, Periscope, Twitter, & Twitch at the same time! With thousands of live viewers commenting in the chat room to add to the fun! ​Live viewers from all over the world instantly become part of the show by chiming in the chat room in hopes that their comments will be selected to appear on the screen in real time. Then if they're really lucky, they'll be invited from the chat room onto the camera to be a face-to-face contestant, & SHOOT their SHOTT at one of their showbiz crushes. After a fun & rigorously entertaining on-camera screening process, the finalists face-off with an online physical competition. When it's all said and done, our celeb chooses a winner. 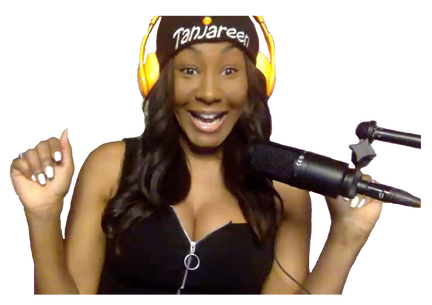 Actress, Producer, Comedienne, Content Creator TANJAREEN THOMAS has been on the silver screen since the early 2000's. She's recurring on UMC's 2021 series MILLENNIALS and on all 8 seasons of the hit sitcom "Family Time". Plus you've seen her on "Insecure", "Curb Your Enthusiasm", "Days of Our Lives" and in the movies "I Got The Hook Up 2", "Love For Sale", "Miss March", and "Johnson Family Vacation". When she's not in TV & film, Mrs. Thomas shows off her comedy chops in social media sketches which get hundreds of thousands of views across the world.

Then...'The Rona' caused studios to close down, and put us all on house arrest. So Tanjareen was stuck in the bed looking for a creative outlet and a way to stay connected with her loyal viewers. Because so many viewers have complimented the beautiful women she posted in photos or in comedy sketches, the idea of SHOOT YOUR SHOTT was inspired!  Alas, here's a chance for the fans to show their faces and speak to their crush directly!